Since early 2009 the Yiddish Art Trio has set out to redefine the scope of contemporary Yiddish music. Deeply rooted in klezmer and Yiddish music, YAT uses traditional idioms to explore new forms and harmonies, vastly expanding klezmer's musical language. Their music, whether ecstatic or introspective, is thoughtfully composed and brilliantly performed. The musicians, recognized globally as authorities within their field, are known for their ability to harness the full range of tonal and expressive possibilities of their instruments, individually and as a trio. The members of YAT have recorded and performed with such noted artists as Yo-Yo Ma, Itzhak Perlman, The Klezmatics, Budowitz, Frank London, Adrienne Cooper, Cantor Yaakov Lemmer, Alicia Svigals and others. The band has toured throughout the United States and Europe, performing their music to appreciative audiences and critical acclaim, and have shared their artistry teaching at KlezKanada, KlezKamp, Yiddish Summer Weimar, Yiddish New York, The American Festival of Fiddle Tunes and many other workshops and classrooms all over N. America and Europe. 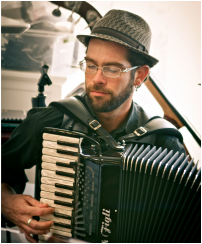 Patrick Farrell- accordion Patrick Farrell is an accordionist, composer and bandleader from the United States who lives in Berlin, DE. He currently performs unique and unusual duets with trumpeter Ben Holmes, new Yiddish song duets with soprano Sveta Kundish, and plays in chamber-folk ensemble Ljova and the Kontraband, Frank London's Klezmer Brass All-Stars, and in Alicia Svigals' Klezmer Fiddle Express. Farrell has been called a "wizard", a player of “mordant wit and blistering speed”, and has appeared on over 45 recordings. 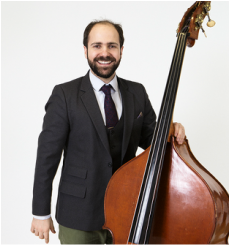 Benjy Fox-Rosen- double bass and voice   Hailed by the Forward as “one of the rising stars in the Yiddish music scene,” in 2014 Fox-Rosen released to critical acclaim “Two Worlds / Tsvey Veltn,” a song-cycle of original compositions set to the poetry of beloved Yiddish bard, Mordechai Gebirtig (1877-1942). The album was named one of the top five Jewish music recording of 2014 (The Forward). In 2012-2013 Fox-Rosen was a Fulbright Scholar in Moldova where he researched commonalities in Moldovan folk music and Yiddish song. Fox-Rosen has performed at Lincoln Center, The Kennedy Center, the Krakow Jewish Culture Festival, Wiener Festwochen, the Edinburgh Fringe Festival and on many other stages internationally. Fox-Rosen is currently splitting his time between Vienna, Austria and Transylvania, Romania. 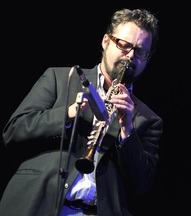 Michael Winograd- clarinet Clarinetist Michael Winograd is one of the most sought out Klezmer musicians today. He performs internationally with his own groups, Tarras Band and Sandaraa, as well as with Socalled, Budowitz, Frank London and others. He teaches regularly at KlezKamp, KlezKanada and other Jewish music workshops throughout North America and Europe. His new project, Sandaraa, a collaboration with vocalist Zeb Bangash from Lahore, Pakistan, received the prestigious Map Fund Fellowship in 2013 and earned Michael a composition grant from Chamber Music America.  His most recent album “Storm Game” was released on Golden Horn Records in 2012.